Following a path to independence 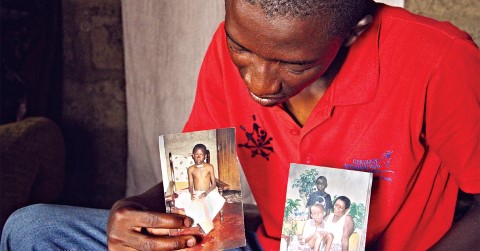 Education and health assistance transformed Levy’s life from a sickly boy to an ambitious scholar.

Levy’s father died when he was 4. But that was only the beginning of the hardships the little boy from Lusaka, Zambia, faced during childhood. He spent years breathing through a tube and underwent 10 surgeries. Yet, without a note of self-pity, Levy, now 18, downplays his difficulties. He says simply, “I remember living a restricted life.”

Levy’s health difficulties began to manifest when he was about 6 as he suffered increasingly from labored breathing. By the time he was 8, when he became enrolled in CI’s sponsorship program, he could only look on longingly as his friends and younger brother participated in the typical playful fun and games that define childhood.

After being diagnosed with a benign tumor in his throat, CI’s doctors coordinated the many surgeries Levy needed at a teaching hospital in Lusaka.

Above and beyond the health and education benefits that helped Levy navigate his tumultuous childhood, two key factors significantly impacted his future success: his participation in CI’s youth programs and the longtime encouragement of his sponsor, Jack Weber.

“For a while,” Levy says of his years with a tracheal tube, “I couldn’t speak or make any sound.” He got his voice back when, one evening, he didn’t cover his tube and accidentally inhaled something. “I started coughing and, in the process, my voice came through. It was a painful blessing,” he says.

When he was 12, a tutor in the CI library pried Levy and a few others away from their computers and into a Youth Leadership training seminar. He recalls feeling “so small among all the youth who looked so big.” Levy didn’t know it then, but that was the beginning of a vast transformation in his life.

The young man admits today that he was surprised to find himself interested in the classes. “My favorite topics,” he says, “were ‘Qualities of a Good Leader’ and ‘Self-Awareness.’”

As a preteen, Levy was attracted to the CI community center because of the library – especially the computer center. “I spent my free time in the library,” he says, “either studying or surfing the Net with the help of library tutors.”

Despite his struggles (or perhaps because of them), Levy has become one of those people who is always smiling and lifting the spirits of those around him. He harnessed that charisma as an empowered CI youth leader. At 15, Levy ran for, and won, the office of president for his agency’s Youth Council.

Democratically elected by his peers, Levy was responsible for a number of duties, including managing negotiations among those he represented and reaching consensus on which community-improvement projects to implement.

Levy’s exposure to computers at CI — combined with his experiences in our youth programs — fostered a dedication to excel in school. He’s now taking business classes at a local college.

Jack, Levy’s sponsor since the beginning, has been rooting the young man on for more than 10 years. The Minneapolis resident says he’s delighted by his sponsorship of Levy and the progress the young man has achieved.

“Despite his early health problems, Levy is doing so well,” Jack says. “His involvement with CI is a real success story. He sent me two letters recently telling me he’d applied for college.” The last of those two letters, Jack adds, said, “I made it!”

Getting accepted into college was a huge accomplishment. But it was only the first of two important steps Levy needed to overcome. The second was paying for it — an overwhelming concern for his single-income family.

Fortunately, Levy’s dedication toward earning good grades, plus his hard-earned leadership skills, merited him one of CI’s HOPE scholarships. Today, he is enrolled in business classes at a local college.

“Being with CI,” says Levy, “has been an amazing, successful and rewarding experience. My life simply changed for the better!”

We use cookies on our website to give you the most relevant experience by remembering your preferences and repeat visits. By clicking “Accept”, you consent to the use of ALL the cookies.
Do not sell my personal information.
Cookie SettingsAccept
Manage consent

This website uses cookies to improve your experience while you navigate through the website. Out of these, the cookies that are categorized as necessary are stored on your browser as they are essential for the working of basic functionalities of the website. We also use third-party cookies that help us analyze and understand how you use this website. These cookies will be stored in your browser only with your consent. You also have the option to opt-out of these cookies. But opting out of some of these cookies may affect your browsing experience.
Necessary Always Enabled
Necessary cookies are absolutely essential for the website to function properly. These cookies ensure basic functionalities and security features of the website, anonymously.
Functional
Functional cookies help to perform certain functionalities like sharing the content of the website on social media platforms, collect feedbacks, and other third-party features.
Performance
Performance cookies are used to understand and analyze the key performance indexes of the website which helps in delivering a better user experience for the visitors.
Analytics
Analytical cookies are used to understand how visitors interact with the website. These cookies help provide information on metrics the number of visitors, bounce rate, traffic source, etc.
Advertisement
Advertisement cookies are used to provide visitors with relevant ads and marketing campaigns. These cookies track visitors across websites and collect information to provide customized ads.
Others
Other uncategorized cookies are those that are being analyzed and have not been classified into a category as yet.
SAVE & ACCEPT
Skip to content