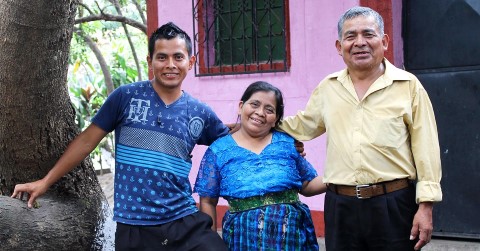 Lacking formal training, Esteban began earning money as a child performing grueling manual labor on large farms in Guatemala. “The work was intense, under tough conditions, under the hot sun,” Esteban says. “I suffered thirst and hunger. The salary was always really low. We never got ahead.”

Toiling so hard for such little pay — with no end in sight — can be demoralizing. Esteban knew he didn’t want that for his five children, including Edwin.

Esteban and his wife, Marta, enrolled Edwin in CI’s program when he was 8 years old. The benefits he received to stay healthy and support his education were crucial to a family living on only $118 a month. But the benefit that truly gave Edwin an extra edge was CI’s Career Readiness program. Through it, the young man learned life skills that set him up for successful employment.

Edwin didn’t waste any time using his new knowledge. Within a year, he developed a business plan and started his own thriving business raising and selling chickens.

He chose poultry farming because he saw a need for it. “I thought about having a business to be able to provide something lacking in my community,” he explains. “There are no supermarkets nearby. I thought to myself, ‘I can raise chickens and sell them.’”

Edwin’s family works together on the chicken business and is making real financial headway. But the business has done more than just provide necessities. It has become a source of purpose and self-worth for the entire family.

Edwin says, “With this project, I feel useful. I feel like I’m not the only one getting ahead. My whole family is getting ahead.”

His father agrees. “Before we had this business, we didn’t have much motivation to keep moving forward. Now we have a reason to fight on.”

Even Marta, who already contributed much to her family as a homemaker, feels self-actualized. “Now I’m involved in the business, too. Now I feel like I can help out economically, as well,” she says.

A plan to thrive

With the chicken business, Edwin and his parents are creating a new path for themselves.

“We’re taking advantage of this opportunity as a family. We’re all learning, and we’re all benefitting,” Marta adds.

And Edwin isn’t stopping there. He would like continue his education, studying animal husbandry at university.

“I feel thankful, and I also have a commitment to keep moving forward,” he explains.

With pride in his work and his family by his side, Edwin is no doubt on the right track.

We use cookies on our website to give you the most relevant experience by remembering your preferences and repeat visits. By clicking “Accept”, you consent to the use of ALL the cookies.
Do not sell my personal information.
Cookie SettingsAccept
Manage consent

This website uses cookies to improve your experience while you navigate through the website. Out of these, the cookies that are categorized as necessary are stored on your browser as they are essential for the working of basic functionalities of the website. We also use third-party cookies that help us analyze and understand how you use this website. These cookies will be stored in your browser only with your consent. You also have the option to opt-out of these cookies. But opting out of some of these cookies may affect your browsing experience.
Necessary Always Enabled
Necessary cookies are absolutely essential for the website to function properly. These cookies ensure basic functionalities and security features of the website, anonymously.
Functional
Functional cookies help to perform certain functionalities like sharing the content of the website on social media platforms, collect feedbacks, and other third-party features.
Performance
Performance cookies are used to understand and analyze the key performance indexes of the website which helps in delivering a better user experience for the visitors.
Analytics
Analytical cookies are used to understand how visitors interact with the website. These cookies help provide information on metrics the number of visitors, bounce rate, traffic source, etc.
Advertisement
Advertisement cookies are used to provide visitors with relevant ads and marketing campaigns. These cookies track visitors across websites and collect information to provide customized ads.
Others
Other uncategorized cookies are those that are being analyzed and have not been classified into a category as yet.
SAVE & ACCEPT
Skip to content